With distance-learning the norm now, can I record my child’s class session? 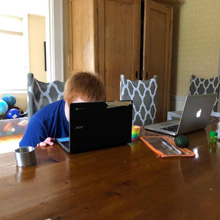 Special education attorney Jeffrey Forte of Fairfield County is interviewed by CT Post reporter, Jo Kroeker, about whether or not parents can record their child’s class session during distance-learning.

Darien parent Tricia Bresnahan said her son, a seventh grader, benefits both from the group instruction online for general education and, when it starts, one-on-one support for his special-education needs. As the district moved online, she said her top priority was to make sure he was learning, and concerns of privacy were secondary to communicating with teachers and peers online.

In the new world of distance learning for kindergarten through 12th grade, teachers are finding different ways to hold classes.

Some record themselves teaching and put the videos online or in programs that students have access to. Others host classroom discussions via videoconferencing apps, from Google Hangouts to Webex to Zoom.

The use of videoconferencing apps has raised questions about whether these lectures can be recorded. Recordings could be helpful for students to review for homework or shared with another student who could not log in at that time for one reason or another.

But is that allowed?

The answer is “it depends.”

But to respect the privacy rights of all students, Gopalakrishnan said superintendents should ask parents not to record virtual class sessions, “unless necessary related to access or special education.” In such cases, the district may wish to request a case-by-case conversation with the family, he said.

Districts were waiting for this guidance because recordings could breach student privacy.

Jeffrey L. Forte, who specializes in special education law, said there are restrictions on recording teachers. Connecticut is a two-party state for recording, and parents would need a teacher’s — and more likely an administrator’s — consent.

Instead of going down that route, he recommends parents keep a written log, noting whenever students respond to lectures or experience difficulties with homework or logging on.

“It’s going to make parents more informed participants,” he said. “They have this unique opportunity to see into their child’s education more intimately.”

Using their electronic devices, parents can also take videos or record audio of their child working through math in, for example, a Google Hangout, he said.

“At the end of the day, there are going to be students for whom remote learning won’t work because of their disability,” he said. “That is really where parents should be focusing their efforts on at this time.”

Tricia Bresnahan said she is keeping records of the special-education services her son has received and when they started.

“Some services just aren’t happening,” she said. “Students definitely are not getting what they usually get.”

The more data a parent can collect — documenting whether their child received instruction, how long they were on the computer and if they engaged — the easier it will be for a parent of a special-education child to ask the district to re-evaluate their child to see if they progressed or regressed, Forte said.

Bresnahan, who has a front-row seat to her son’s education, has seen how the 7th grader has progressed in some of his Zoom classes. In some ways, the virtual platform lends itself to inclusion more than the physical building, she said.

In one class, everyone heard the same lecture, but ahead of time, her son received notes with information highlighted and when there was a quiz after, his was modified.

“Everybody is there at the same time, everybody leaves the class at the same time,” she said. “There were times during the year where he would leave while everyone is doing something else, which I don’t think is the best way to handle inclusion. In some ways, this is more inclusive.”

But with the move to online learning, some districts sent out documents asking parents to agree to terms before receiving remote instruction. One of those conditions was not to record the child or teacher instructing the child, Forte said.

“That they cannot do,” he said.

In the weeks since, a lot of those districts have retracted the signature requirements, Forte said.

Superintendents are encouraged to tell parents not to record lessons, and districts should consider whether parents should be permitted to opt-out of live videoconferencing opportunities, Gopalakrishnan said.

However, it is inappropriate for districts to condition students’ access to educational opportunities on parents signing legal waivers, he said.

Directory of Connecticut Summer Camps for Children with Disabilities